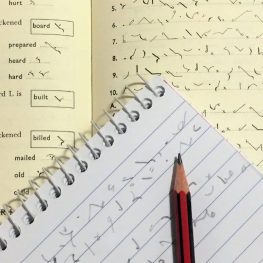 Shorthand, also called stenography, a system for rapid writing that uses symbols or
abbreviations for letters, words, or phrases. Among the most popular modern systems are
Pitman, Gregg, and Speedwriting.Besides being known as stenography (close, little, or
narrow writing), shorthand is sometimes called tachygraphy (swift writing) and brachygraphy
(short writing). Because shorthand can be written rapidly, the writer is able to record
the proceedings of legislative bodies, the testimony of law courts, or dictation in
business correspondence. In addition, shorthand has been used through the centuries as a
cultural tool: George Bernard Shaw wrote his plays in shorthand; Samuel Pepys recorded his
diary in shorthand; Cicero’s orations, Martin Luther’s sermons, and Shakespeare’s plays
were all preserved by means of shorthand.