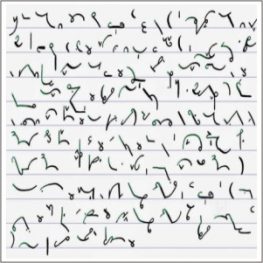 Shorthand is an abbreviated symbolic writing method that increases speed and brevity of writing as compared to longhand, a more common method of writing a language. The process of writing in shorthand is called stenography, from the Greekstenos (narrow) and graphein (to write). It has also been called brachygraphy, from Greek brachys (short) and tachygraphy, from Greek tachys (swift, speedy), depending on whether compression or speed of writing is the goal. Many forms of shorthand exist. A typical shorthand system provides symbols or abbreviations for words and common phrases, which can allow someone well-trained in the system to write as quickly as people speak. Abbreviation methods are alphabet-based and use different abbreviating approaches. Several autocomplete programs, standalone or integrated in text editors, based on word lists, also include a shorthand function for frequently-used phrases. Many journalists use shorthand writing to quickly take notes at press conferences or other similar scenarios. Shorthand was used more widely in the past, before the invention of recording and dictation machines. Shorthand was considered an essential part of secretarial training and police work, as well as useful for journalists. Although the primary use of shorthand has been to record oral dictation or discourse, some systems are used for compact expression. For example, healthcare professionals may use shorthand notes in medical charts and correspondence. Shorthand notes are typically temporary, intended either for immediate use or for later typing, data entry, or (mainly historically) transcription to longhand, although longer term uses do exist, such as encipherment: diaries (like that of the famous Samuel Pepys) being a common example.

Systems resembling standard writing
Some shorthand systems attempted to ease learning by using characters from the Latin alphabet. Such non-stenographic systems have often been described as alphabetic, and purists might claim that such systems are not ‘true’ shorthand. However, these alphabetic systems do have value for students who cannot dedicate the years necessary to master a stenographic shorthand. Alphabetic shorthands cannot be written at the speeds theoretically possible with symbol systems—200 words per minute or more—but require only a fraction of the time to acquire a useful speed of between 60 and 100 words per minute. Non-stenographic systems often supplement alphabetic characters by using punctuation marks as additional characters, giving special significance to capitalised letters, and sometimes using additional non-alphabetic symbols. Examples of such systems include Stenoscript, Stenospeed, Speed writing, Forkner shorthand, Quick hand and Alpha Hand. However, there are some pure alphabetic systems, including Personal Shorthand, SuperWrite, Easy Script Speed Writing, Agili writing and Keyscript Shorthand which limit their symbols to a priori alphabetic characters. These have the added advantage that they can also be typed—for instance, onto a computer, PDA, or cellphone. Early editions of Speed writing were also adapted so that they could be written on a typewriter, and therefore would possess the same advantage.

I am delighted to welcome you to Icollegete. Icollegete is an educational institution of exemplary standards in Pakistan. Commitment to quality education, extensive investment, solid management and continuous development are the principles that have raised the Institute profile and shaped its growth. Students at Icollegete enjoy the advantages of a unique combination: Both nationally and internationally recognized quality and credibility of First Class education.