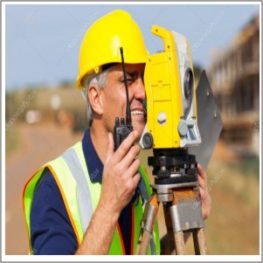 Surveying or land surveying is the technique, profession, and science of determining the terrestrial or three-dimensional position of points and the distances and angles between them. A land surveying professional is called a land surveyor. These points are usually on the surface of the Earth, and they are often used to establish land maps and boundaries for ownership, locations like building corners or the surface location of subsurface features, or other purposes required by government or civil law, such as property sales. Surveyors work with elements of geometry, trigonometry, regression analysis, physics, engineering, metrology, programming languages and the law. They use equipment like total stations, robotic total stations, GPS receivers, retro reflectors, 3D scanners, radios, handheld tablets, digital levels, drones, GIS and surveying software. Surveying has been an element in the development of the human environment since the beginning of recorded history. The planning and execution of most forms of construction require it. It is also used in transport, communications, mapping, and the definition of legal boundaries for land ownership. It is an important tool for research in many other scientific disciplines.

Surveying Equipment:
The main surveying instruments in use around the world are the theodolite, measuring tape, total station, 3D scanners, GPS/GNSS, level and rod. Most instruments screw onto a tripod when in use. Tape measures are often used for measurement of smaller distances. 3D scanners and various forms of aerial imagery are also used.

Surveying Techniques:
Surveyors determine the position of objects by measuring angles and distances. The factors that can affect the accuracy of their observations are also measured. They then use this data to create vectors, bearings, coordinates, elevations, areas, volumes, plans and maps. Measurements are often split into horizontal and vertical components to simplify calculation. GPS and astronomic measurements also need measurement of a time component.

Angle Measurement:
Historically, horizontal angles were measured by using a compass to provide a magnetic bearing or azimuth. Later, more precise scribed discs improved angular resolution. Mounting telescopes with reticles atop the disc allowed more precise sighting (see theodolite). Levels and calibrated circles allowed measurement of vertical angles. Verniers allowed measurement to a fraction of a degree, such as with a turn-of-the-century transit. The plane table provided a graphical method of recording and measuring angles, which reduced the amount of mathematics required. In 1829 Francis Ronalds invented a reflecting instrument for recording angles graphically by modifying the octant. By observing the bearing from every vertex in a figure, a surveyor can measure around the figure. The final observation will be between the two points first observed, except with a 180° difference. This is called a close. If the first and last bearings are different, this shows the error in the survey, called the angular misclose. The surveyor can use this information to prove that the work meets the expected standards.

Levelling:
The simplest method for measuring height is with an altimeter using air pressure to find height. When more precise measurements are needed, means like precise levels (also known as differential leveling) are used. When precise leveling, a series of measurements between two points are taken using an instrument and a measuring rod. Differences in height between the measurements are added and subtracted in a series to get the net difference in elevation between the two endpoints. With the Global Positioning System (GPS), elevation can be measured with satellite receivers. Usually GPS is somewhat less accurate than traditional precise leveling, but may be similar over long distances.

I am delighted to welcome you to Icollegete. Icollegete is an educational institution of exemplary standards in Pakistan. Commitment to quality education, extensive investment, solid management and continuous development are the principles that have raised the Institute profile and shaped its growth. Students at Icollegete enjoy the advantages of a unique combination: Both nationally and internationally recognized quality and credibility of First Class education.